In the interpretations of the three Ottorino Respighi’s symphonic poems, “Roman Festivals”,” “Fountains of Rome” and “Pines of Rome”, we will give the maximum emphasis on the orchestra musicians in this “hybrid format”, which is supported in a game of lights and shadows and the videocreaciones of the French filmmaker and photographer Emmanuel Carlier. The 3 poems are set in the streets and squares of the eternal city, where the Bolognese author lived from 1913.

This is about seeing the bright lines that give off the sound waves produced by the symphonic orchestra and about reinterpret, at the same time, the ideas that passed through the head of Respighi while composing the three great scores. Music and light, motion and pictures. A correspondences game between the inner fire of the human being and the material: stone / water / pine.

We no longer want to light a symphonic poem, go with its music and embrace its content. On stage, only the conductor accompanied by musicians of the orchestra. Respighi’s music allows the musicians and their instruments to be the big players with their choreographed movements determined by the richness of the score. There are screens around them capable of capturing the light of the water video projections, sculptures, pine and shadows spectra in continuous motion.

OTTORINO RESPIGHI
A Rimsky-Korsakov pupil and follower of the recovered neoclassical Italian tradition of Gregorian chant, Palestrina and Monteverdi, Respighi also feel genuine fascination with the colorful music of Wagner and his disciples. He wanted to synthesize in a unique style the contemporary influences such as Richard Strauss and the French impressionists with the Italian tradition. The Roman Trilogy brings together three of the works in which he managed to take a personal language, imaginative and immensely exciting, in the most brilliant and timeless way.
“ACT ONE: FESTE ROMANE”
1.1 CIRCENSES
Fire, Sand and Blood, passion. A circle of fire close completely around the man statue. He struggles with himself and against their own ghosts. The head of the grave statue-man crashes slowly into pieces. Dust fills the entire screen.
1.2. IL GIUBILEO
Only music. Later, the pilgrims move like a procession. The withdrawal will be emphasized: rows of silhouettes are becoming more numerous and smaller, seems to stretch to infinity. The hundreds of characters melt and blend with a text:the Aeneid. The camera slowly moves up and reveals to us a view of Rome.
1.3. L’OTTOBRATA
Only music. Later, three paintings by Caravaggio appear. The orchestra is multi-colored with lights to appear as a continuation of the paintings of Caravaggio.
1.4. LA BEFANA (LA EPIFANÍA)
On both screens, a trip in fast camera in the night in Rome. At the same time, anonymous characters of movies overlays are projected on monuments, fountains, sculptures, floor, walls, which are as ghostly apparitions of the turmoil of the city and the memory of its inhabitants.

“ACT TWO: FONTANA DI ROMA”
2.1. LA FONTANA DI VALLE GIULIA ALL’ALBA
It beggins with a drop coming from the top of the screen progressing slowly while deforming and crushing other drops that appear and gather on the surface of the screen forming a puddle. Finally, the entire screen is an area of water and liquid waves. They gradually calm down.
2.2. LA FONTANA DI TRITONE AL MATTINO
Morning Light. Male and female bodies are incorporated. They travel, meet, and encounter each other. Games with stripes of dazzling light. Eventually, the body is idealized into a perfect sculpture: the Triton Fountain, Bernini.

2.4. FONTANA DI VILLA MEDICI AL TRAMONTO
Twilight, Night-death time. Sources of tears emerge from the eyes of the sculptures. The bodies fall into a liquid surface. They sink and disappear under the pond that gives the impression of a giant lake at night. The water is calm, we find out the pond of the Fontana dei Medici.

3.1. I PINI DI VILLA BORGHESE
Pastoral and sensual evocation of the statue of Bernini Apollo and Daphne. The scene is set in a pine forest. Emmanuel Carlier directs a masterful version of the myth of Daphne and Apollo with two teenagers. Daphne, to escape Apollo, is transformed into a laurel.

3.3. I PINI DEL GIANICOLO
The whole sequence is a shadow’s game. The hands become the foliage of pines that grow and grow. At the end of this musical movement, all the hands in chinese shadows regroup at the center of the screen to form the head of a nightingale singing

3.4. I PINI DELLA VIA APPIA
It will evok the Via Appia through its history, a great carpet of polished stone. Below are the bodies representing slaves and an army of pines that advance and recede, more and more numerous, until the musical climax.

This is about seeing the bright lines that give off the sound waves produced by the symphonic orchestra and about reinterpret, at the same time, the ideas that passed through the head of Respighi while composing the three great scores. Music and light, motion and pictures. A correspondences game between the inner fire of the human being and the material: stone / water / pine. 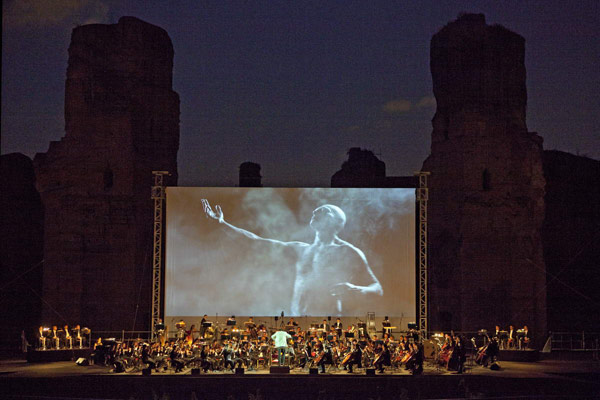 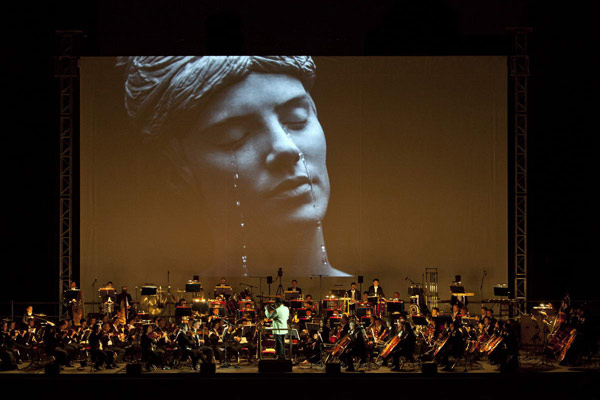 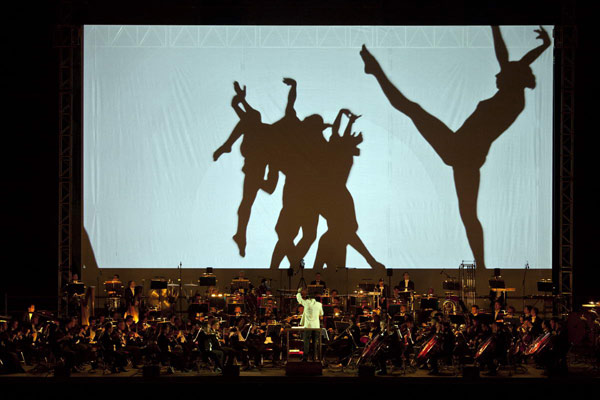 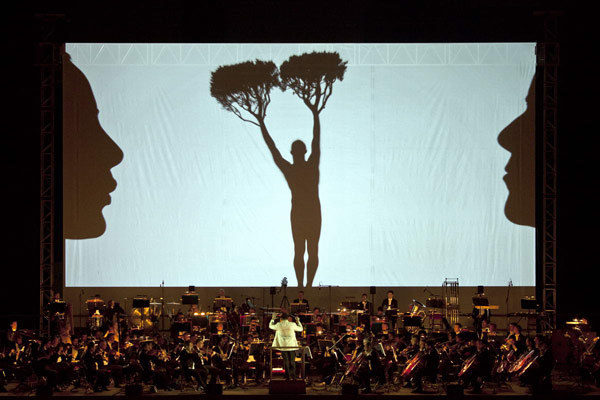