Sonntag aus Licht (Sunday of light) is an opera – oratory composed by Karlheinz Stockhausen between 1988 and 2003. Sonntag aus Licht is dedicated to the adoration of the energetic creative divinity of the nature and is represented by the union of Michael, Eve and Lucifer walking along the dazzling labyrinths of the attraction masculine feminine, the ego and the psyche and the passion and the reason.Sunday is the work light that ends the cycle of Light septología dedicated to the seven days a week and has nearly thirty hours. This staging seeks to be the binding of Fura ritual, the aesthetic neo-primitivism, the Fura and futuristic hyper operas, entertainment and urban facilities.

The mystical union of Eve, water, and Michael, light, set in a circular space 40 meters in diameter where the public viewed from their chairs, as in a planetarium, sky-stage throughout the scene. Water Eva’s alter ego is an icon of a geyser consists of 7 women, with the lead singer at the top, and 6 dancers move their arms in eastern goddess. Light, played by Michael, is a bright and dazzling that flies over the audience on a crane that allows you to rotate 360 degrees on its axis. The two protagonists move in line with the rotation of the planets, relative time immersed in the interplanetary space. Stockhausen said that music is an art form that takes place in time, which can not be grasped at a glance as an image, but in space time expands and contracts. For this reason, in our stage version of the central column are two winged space plane suspended 17 meters long, that resemble giant hands of a clock, a cosmic clock waves stirred by the 12 musical space travel . Each wave represents the 12 heavenly bodies, the 9 planets in our solar system, sun, moon and a new planet called Micheva, creation of Stockhausen.
This project is inspired by the harmony of the cosmos. It is a live installation in which the sonorous tones reflect the spatial movements, walking from one instrument to another and moving through space thanks to 29 cosmonauts instrumentalists. There is also a display of music that creates an environment in proposing synaesthetic green light for bass instruments and blue for the treble. Water for all musicians at the end of representation, even for the public.
ENGEL-Prozession SCENE 2 41 ‘

… Darkness can not drive out darkness: only light can do that.
Hate can not drive out hate, only love can do that … In the words of Martin Luther King, Stockhausen said in its manifesto that mankind should sleep and dream more often to contact angels. Well, early in the second scene, in the midst of total darkness, while the public is still lying just fantasizing or entering a mild stage of dreams, begins a parade of seven groups of angels singing a capella praise God . The procession begins as acousmatic, with a series of maneuvers executed sound in the darkness, disturbed only by short flashes of light that show time some of the choreography of the angels. As the procession progresses, these celestial beings are lighting the lamps, by way of colored glass flowers, the highlights of their robes. Each of the seven groups of angels distinguishes one color, a different language and gestures as a day of the week to which they belong, as well, singing in Castilian, Chinese, Hindi, Swahili, English, Arabic and German. The procession ends with the final realization of the union, in a fully lit room and when each angel placed the flowers of bright dresses in the middle column of the circle, creating a tapestry of color. At the end of the scene, there are twenty angels on stilts wearing a spectacular wings designed by the Catalan artist Uroz Chu, head of the costume of this project, these angels dancers are moving around the area coinciding with the final tutti choir.
SCENE 3 LICHT – BILDER 41 ‘

On ground water, Eva is unfolded on flute and clarinet and Michael on trumpet and tenor. He sings their praises to God in the mirror that reflects the creation of multiple fragments from the stone to the inside of the mind through moving light images, projected in three dimensions. These images provide an illusion of reality so that the public finds it difficult not to try to achieve these objects with their hands is one of the most dreamlike video works and interesting video Franc Aleu Catalan artist has done until today. On four occasions, the projection screen, as if it were a curtain, sliding sideways to become close in a minute. Each blink viewers discover the depth of 100 meters from a huge stage, in which twenty dancers perform choreography as a tribute to the four elements: water, earth, fire and air. 3D virtual reality has given way to reality.

In the fourth scene, we propose a magical ritual odors: Cuchulainn, Kyphi, Putty, Rosa Mystica, Tate Yunanaka, oud wood and incense, with each of these seven fragrances a tribute to the days of the week. Towards the end of this part appear as mother Eva and Michael as a child, a child climbing on a flying horse led by his mother. In the stage version of La Fura dels Baus, the singers behave as shamans to walk on water to raise altars, with the help of his disciples, and performing rituals dedicated to each weekday. The end of the flying horse is one of the most interesting sculptures German artist Roland Olbeter has created throughout his career.
SCENE 5 HOCH – Zeit 37 ‘CORUS ROOM A
HOCH – Zeit 37 ‘ORCHESTRA ROOM B

Hoch-Zeiten takes place simultaneously in two chambers, interconnected by the transmission of audio and video. The wedding of Eva and Michael are done through the union of two spaces that symbolize two bodies: Room A Eva personifies the home to the choir, while the room B is the body of Michael inhabited by the orchestra. But the space A also plays on the ground, the floor, the ego, reason, the action corresponding with the left brain. The space B, in turn, is related to the night, the cosmos, the music, instinct, dreams of utopia, the psyche and, ultimately, the right brain

Area A: The audience enters the room when you are making five choreographies that symbolize five civilizations: India, China, Arabia, Europe and Africa. The spectators remained standing throughout the performance, so that they can interact with the performers as they dance at the same level by different wedding rituals to conclude a global celebration.
From the angel Michael appeared to Eva flew on his white horse, the actors helped by some members of the public, begin to build a home that symbolizes an alliance of civilizations. After a video conference with the space B, where three musicians play the central theme of Sonntag, the espectadore are invited, one by one to enter the building. The ethnic character of each civilization become angels holding the pillars of the common house.

Area B: on ground water are five orchestral groups led by five directors, on whose music is inserted central duets seven of seven operas Light Cycle. The musicians of the orchestra Stockhausen not remain hidden in the pit, on the contrary, take the stage and not only move as popular music concerts, but as characters in plays, talk to each other, articulating a discourse and generating emotions .

La Fura dels Baus in this last scene recovers his pioneering work in telepresence made between 1994 and 2002. MTM started with the show, where space and audience were divided into two parts, through the BOM Experiences made between different areas connected by videoconference and ending with the opera Auf den Marmor-klipper Batistelli Giorgio, based on Ernst Jünger’s novel and premiered at the Mannheim Opera in the character of memory was interpreted from Barcelona in real time during the staging of the opera.
Another important aspect of this part is that viewers are standing room in the middle of the representation, as in all events Furan language in which you can decide at any time to go, to look, to touch or ultimately, how the public decides that inhabit the stage.Thus, the viewer involved in the action, rather than contemplate their own lives and experience a personal adventure. This interaction achieves its climax when the vital pulse of the audience matches the tempo of the stage.

Sonntags-Abschied: As the audience leaves the room and leaves the building, is accompanied by a version of HOCH ZEIT for five synthesizers. The famous fountain’s Trade Fair in Cologne, which holds this opera, operates its fountains illuminated with white light, accompanied by the music of Stochkhausen.

Stockhausen’s Sonntag Aus Licht (Sunday of light) is the seventh day of the “Light cycle” devoted to the days of the week. La Fura dels Baus has designed this cosmogonic opera as a fantastic ceremonial, different times and stages as the duality between flesh and spirit. 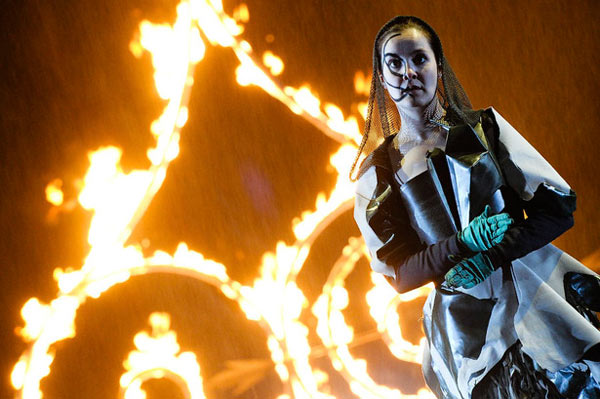 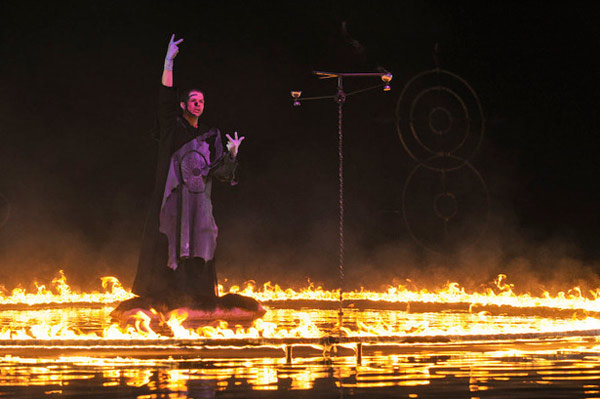 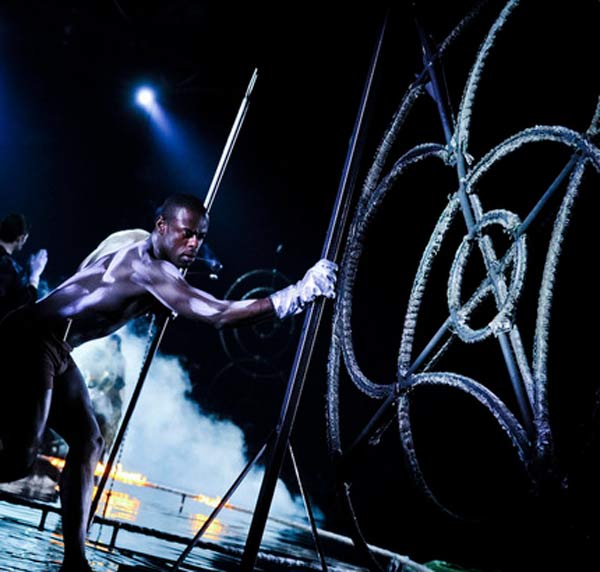 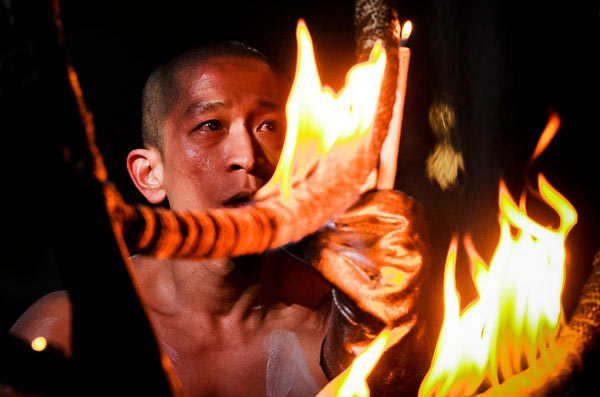 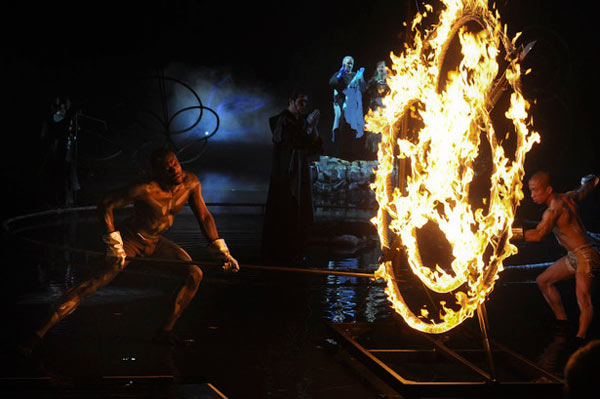 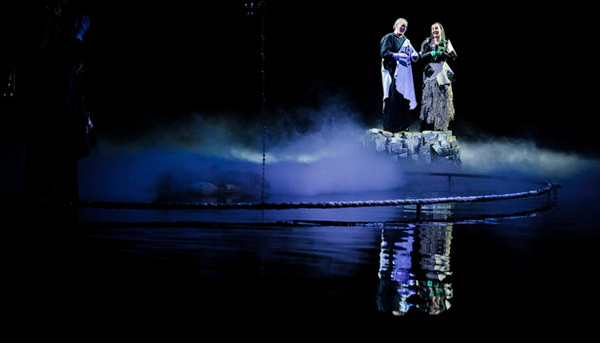 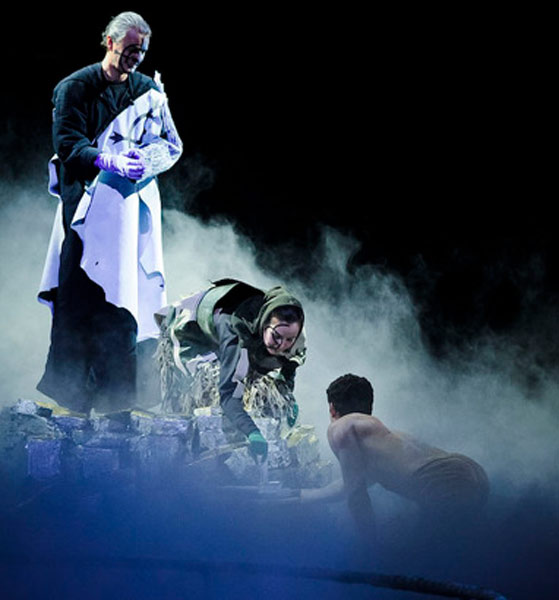 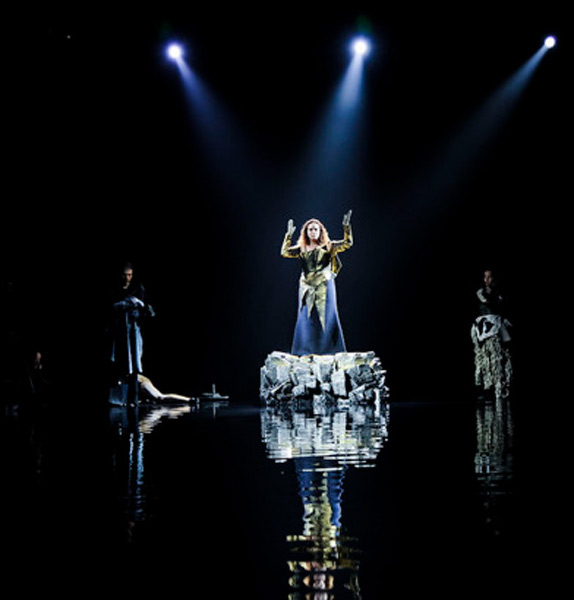 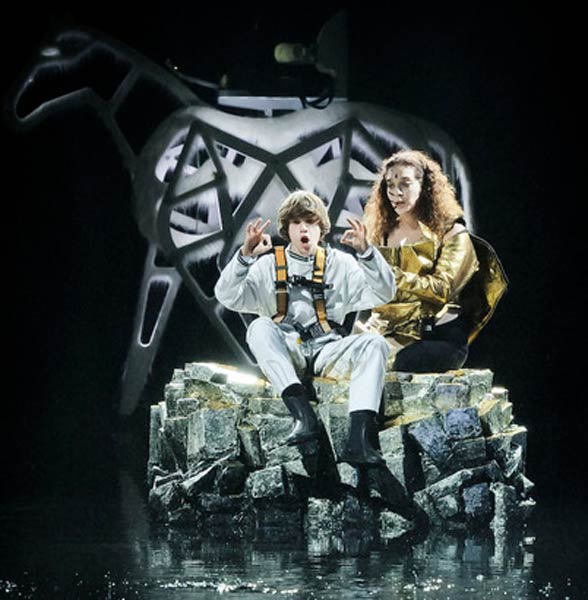 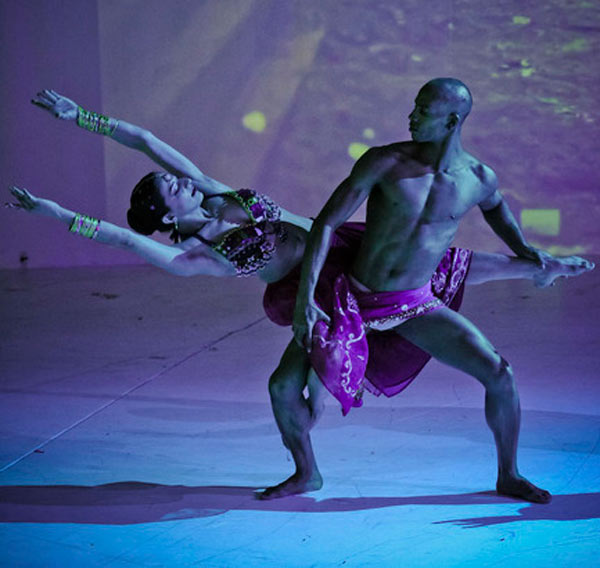 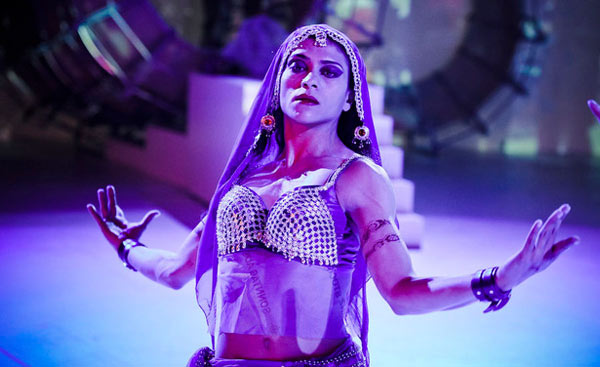 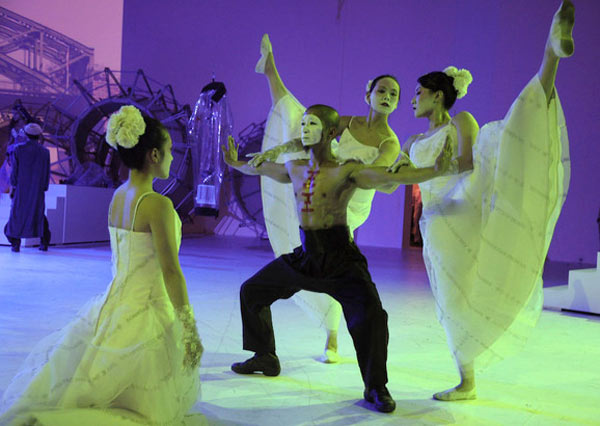 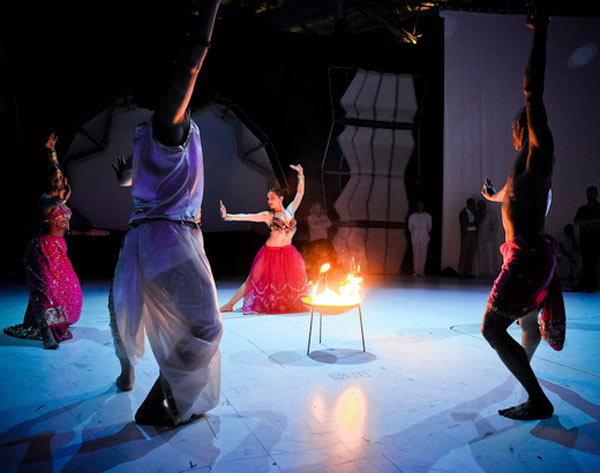 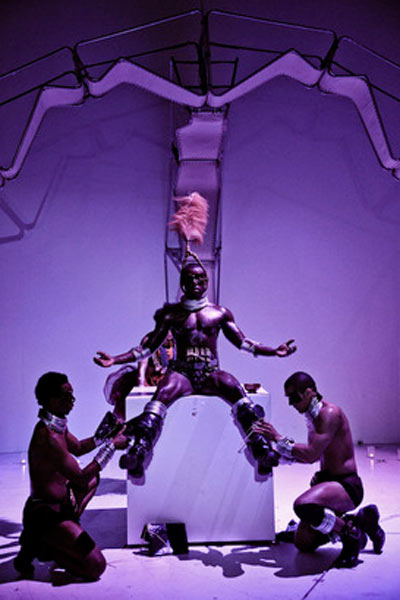 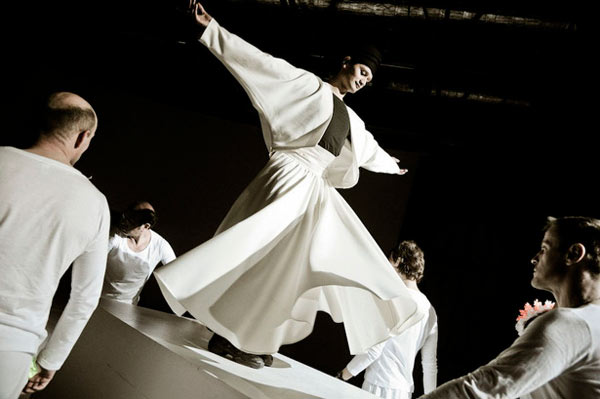 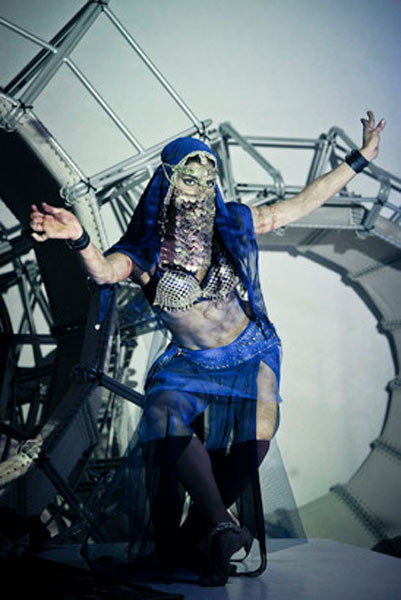 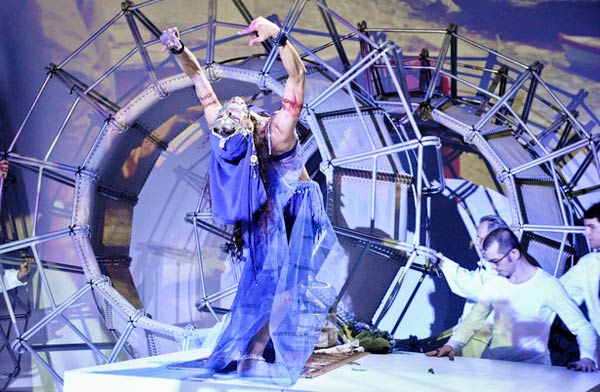 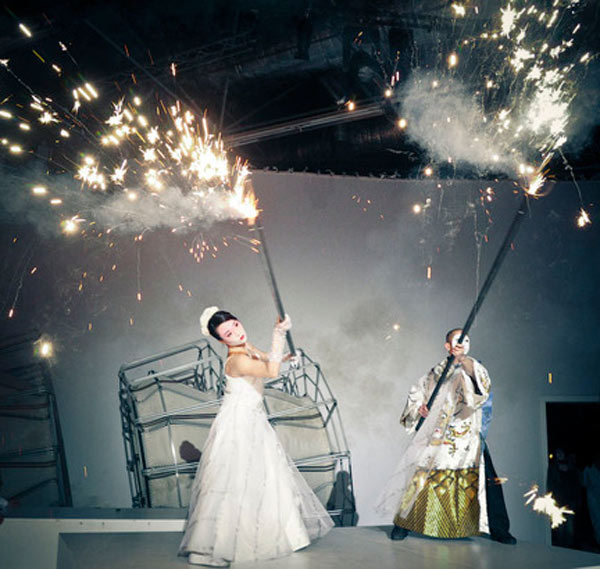 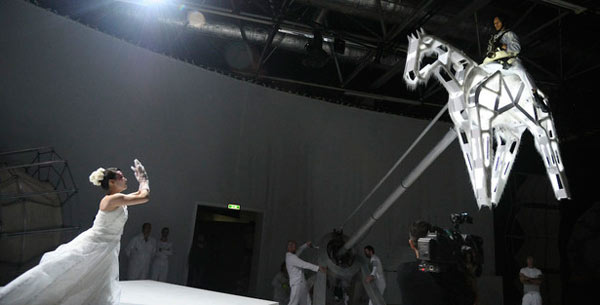